The most common false friends between French and English

After reading the title, you’ve probably conjured up an image of betrayal and feuding friends, who have denied one another! However, in linguistic terms, false friends means something entirely different. Many languages spoken worldwide share a common ancestral root. In Europe, for example, we speak Indo-European languages. Due to this common denominator, similarities exist between these languages. However, although the words may be phonetically similar, with (sometimes) identical spelling, they don’t necessarily have the same meaning. Put simply, two words may sound the same, yet mean something entirely different. We call these words, false friends.

To recognise a false friend you need a subtle and deep understanding of both languages. Professional translators pay special attention to these linguistic details to ensure translated text is not misunderstood.  Right now, we’re going to discuss the most common French-English false friends, or faux amis, that you should be aware of. Along with giving you more insight on how these languages work, you’ll also be able to brush up on your French!

In English, ancient refers to things that are long past and conjures up an image of crumbling castles and stone monoliths! In French, however, the word ancien more commonly refers to something former, rather than old. When using this word, to differentiate between the two, note that if the word ancien is used before a noun, it means former and not old. An example is un ancien combatant which means ‘former soldier’ as opposed to a jousting knight from days of old!

In English, to attend means that you’re present somewhere – “I must attend a meeting today”. However, in French, the usage of the word attendre is different. Attendre roughly means that you’re waiting for something or more generally, ‘to wait for.’ A common French saying which can be used as an example is: Je t’attends which means I’m waiting for you. 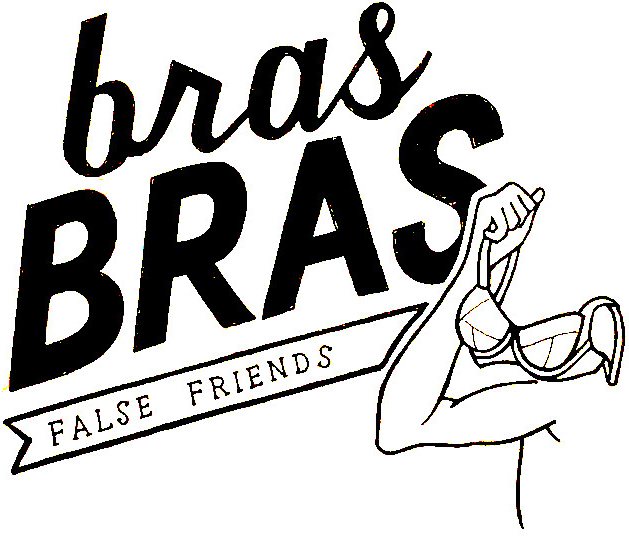 In English, the word bra refers to female undergarments. However, in French, the meaning is quite different! Bras is the French word for arms, as in a limb! The French translation for the English bra is un soutien-gorge which sounds nothing like it’s English counterpart. If you’re planning to go shopping in France, it’s a good idea to have a translation guide with you!

The English word button refer to the discs or beads that are used to fasten articles of clothing. However, the phonetic equivalent in French can also refer to pimples! Since the word is often used in a context of a complaining, English speakers sometimes assume that the meaning is same.

The French grappe means a bunch, cluster or group and does not refer to the fruit. When using this, English speakers often translate it as the fruit and are left wondering what an earth a grappe de bananes is!

The French word raisin actually translates to grape in English! Whereas an English raisin is a French raisin sec!

The English word coin refers to metal money. However, the similar sounding French word means a corner. The direct translation is for coin is, of course, monnaie. Which is pronounced the same as money and is, therefore, a true friend!

The Most Famous Newspapers