Who or what is Caga Tió?

Who or what is Caga Tió?

Who is Tió de Nadal

The Tió de Nadal, pronounced  [tiˈo ðə nəˈðal], is a character in Catalan mythology relating to Christmas. Tió is a wooden log about 30 cm long, which has a smiley face painted on one end of it. He wears a traditional, red hat which resembles that of Santa Claus. Caga Tió, is what he does…

‘Tió’ translates as trunk or log, and Nadal is the Catalan word for Christmas. So, Tió is the Christmas Log. ‘Caga’ means shit or poop, so Caga Tió means shitting log or Shit, log! Confusingly, the word Tío is the Spanish (Castilian) word for uncle, so it is often mistranslated and misunderstood as the Shitting Uncle, or Uncle Shit!

Caga Tió is a very strange and interesting Christmas tradition. It is a shame that it is often translated wrongly, because Tió is really a lot of fun! Read on…

The Myth of Tió de Nadal

Tió is a most welcome Christmas guest for children across Catalonia. The idea is to feed him, as much as you can, from the 8th of December until Christmas Eve so that he can ‘poop out’ gifts for the children! Tió needs a suitable atmosphere to ‘poop out’ the presents. So, naturally, he is kept warm and comfortable. The children cover his rear end with a blanket and feed him every day. He is thought to be very generous, and therefore children take good care of him, in the hope of getting plenty of gifts! 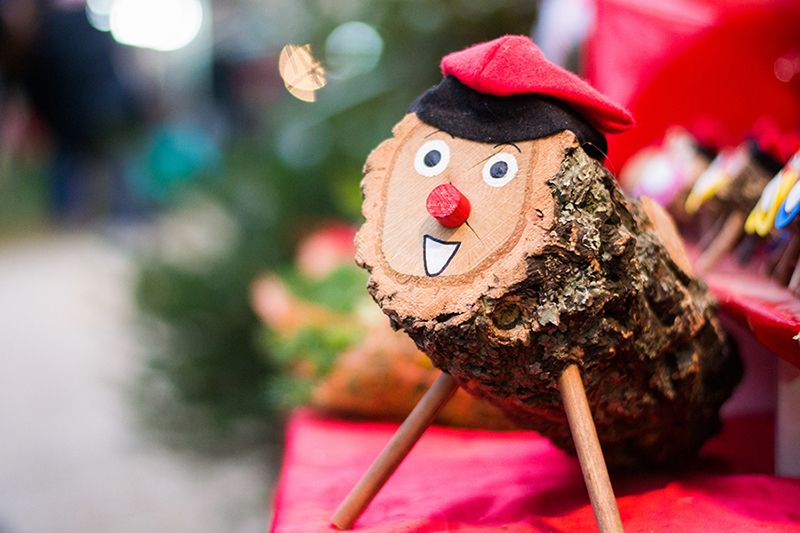 I know, it’s already hard to believe, but it gets even stranger…  Christmas Eve has arrived, Tió is full and (hopefully) ready to poop. First of all, the children must pray for what they wish to “receive” (ew) from Tió. In some families, the praying is no longer practiced, but still the children must leave the room – to “warm their stick” before the beating begins (we’ll come to that).

(The reason, of course, that the children must leave the room is so the parents have a few minutes to quickly hide the presents under Tió’s blanket.)

When the children return they must first sing a song –  Caga Tió – which roughly translates as “poop for me” (or more precisely, an imperative, “Shit, log!”). After singing to Tió (which is quite sweet), the children must beat Tió with a stick (what?!) to encourage him to poop the gifts out.

And as they beat him, as if by magic, the gifts are unveiled one by one until none of them are left (hidden by the blanket). The gifts are usually small, often edible (!) items, which are traditionally shared with the whole family.

Caga Tió is popular in Catalonia and parts of Aragon, where it is seen as an important part of their cultural heritage. In Aragon it is also called Tizón de Nadal or Toza. Similar traditions exist in neighboring Spanish regions, such as the Cachafuòc or Soc de Nadal in Occitania.

So Shit, log! and leave us all something tasty (ew) this Christmas! Bon Nadal!

Topics you should avoid at Christmas Dinner!