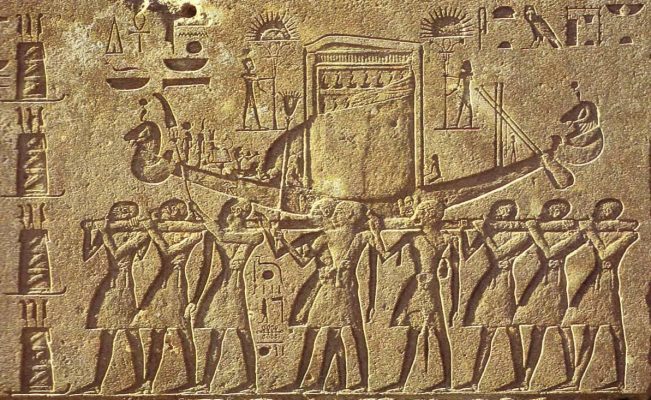 The other day we were translating a text about the gods of the Nile from Spanish into French. According to the source text, the god was accustomed to sailing down the river “en una corteza sagrada”. This literally means “a piece of sacred tree bark”. The French was, logically enough, “sur une écorce sacrée”.

We couldn’t quite see what the god was doing on a piece of bark until we suddenly realised that “corteza” translates as “bark” in English. Could the Spanish have started out as the English phrase “in a sacred bark”? If so, “bark” would be a boat and some way along the way it had been wrongly translated into Spanish.

There are two problems here:

We decided to translate it as “bateau” and suggested to the client that the original text should be modified to read “barco”, the Spanish word for boat. Ironically, boat is a close cognate of “bark” in its nautical, not horticultural, meaning.

This is a typical mistake with homonyms (two meanings of “bark”) made by someone translating into their native language, i.e. from a language (English in this case) which they had imperfect knowledge of.

The translation we were doing was from Spanish into French. Yet, the correct rendering into French (“sur un bateau sacré”) depended on knowledge of a third language, English.

There are many lessons here. Perhaps the most important is that translation is a cultural activity, depending on a huge amount of both linguistic and non-linguistic knowledge. This is one case where machine translation would have had no chance, unless the computer had cultural knowledge way beyond that of any computer software.

We caught this problem in time only because the reviewer happened to speak all three languages. All too often, problems like this escape undetected.