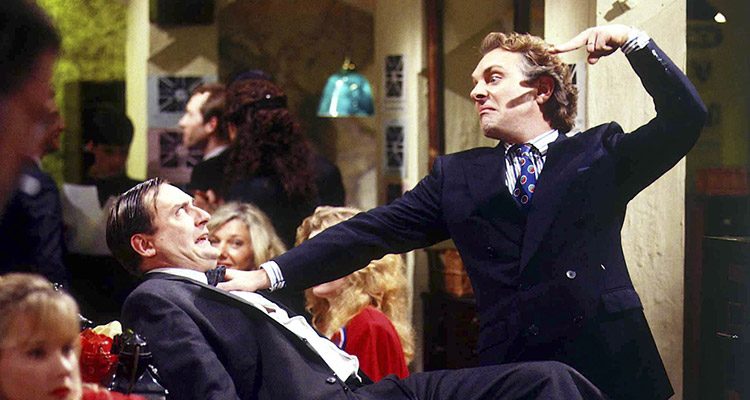 Idiocracy appeared as a ‘new’ word in 2006, when Mike Judge and Ethan Cohen released a movie of the same title. The movie tells the story of an “ordinary Joe” who wakes up 500 years from now, to discover the world is ruled by idiots. Some might say, this is not science fiction. But although its current re-emergence is new, idiocracy is not a new word.

The roots of the word originate from idios “one’s own” + krasis “mixture,” from PIE root *kere– “to mix, confuse; cook”.

Idio itself, is an interesting word — at one time it meant a private person (as opposed to a public servant). Over time, the definition evolved from “private” to “unlearned”. Eventually evolving into the word idiotes, which is used in the Bible — “one without understanding” (1 Corinthians 14:23-24). Meanwhile, as an adjective, idios — meaning “personal” or “one’s own” developed into words like idiosyncrasy.

The evolution of idiocracy

Although words like democracy and aristocracy originated in ancient Greek, idiocracy most likely evolved from a different route. Surprisingly, it can traced all the way back to 1654, in Seth Ward’s Vindiciæ academiarum. And for most of the last 350 years, idiocracy referred to “government by self-rule”.

Etymologically, the idio in this word is from the same root as idiosyncrasy, and by 1681 idiocracy had come to mean, “peculiarity of constitution; that temperament, or state of constitution, which is peculiar to a person”. So it was almost a synonym of idiosyncrasy — as we know, language is ever-evolving!

In the 18th century, a fashion developed in English satire of adding -ocracy to English words. English humour has always loved word-play! Mobocracy being a special favourite of mine!

By 1878, idiocracy was already being used with its current meaning — that of “government by idiots”. The following citation is anti-semitic, so please forgive it’s inclusion, but:

“No Jew of them all would..set up a theocracy, or *idiocracy, for this is the exact word, more eagerly and remorselessly.”

In the 19th century, the trickle of such formations became a flood; and the majority of the new -ocracy words were terms of ridicule. So this is the tradition to which idiocracy belongs. There were also earlier terms — foolocracy (1832) and idiotocracy (used by Ambrose Bierce in 1909) which were contemporary, and used to express the same satirical disdain.

On release, the movie was not a big commercial success, however, since 2016 it has gained considerable interest — for obvious reasons. In Time magazine’s review of the movie they wrote

“I called the people who made Idiocracy to see how they so accurately predicted the future. “I’m no prophet,” Judge told me. “I was off by 490 years.” He too is shocked at how eerily similar the world has become to the one his movie depicted. He and Idiocracy co-writer Etan Cohen have been working on fake campaign ads for Camacho to be used as anti-Trump web videos, but they’re having a hard time. “Our jokes would be like, ‘I’m going to build a wall around the earth.’ They were only incrementally stupider,” says Cohen. “Writing Idiocracy was just following your id. Now unfortunately our id has become our candidate for President.” The danger here is clear: we will no longer be able to have comedies with hilarious dumb characters.”

Currently, very few dictionaries have taken the official step of including the word, even though the modern usage is increasing. Certainly, the older meanings have fallen out of use.

Currently, the dictionaries which do include idiocracy, offer two definitions:

Worth noting, is the Urban Dictionary which includes this rather marvellous definition: