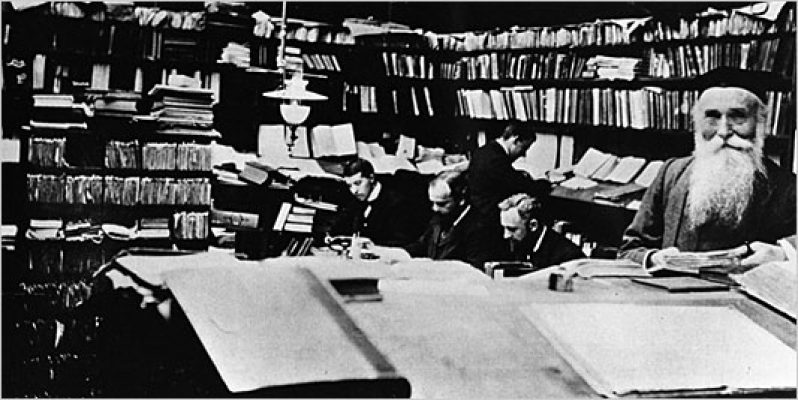 The work of an etymologist requires a lot of patience. It involves tracking down the earliest use of a word in print (which can be tricky if not many written documents survive from a particular era). Also, recording how it changed in meaning and form over the centuries, and drawing parallels between languages. It must be established if, and when, a word was borrowed from one language into another, and much more.

The work of etymologists is not flashy, and may not seem that interesting to a lot of people. However, it is important for linguists and language learners. It allows us to see connections between languages, trace the meaning of words and how they change. Which, in turn, enables us to understand the meaning of words and, language in general, on a much deeper level.

In this article, we will take a look at two of the most famous etymologists and their contribution to linguistics.

Noah Webster (1758 – 1843), was a lexicographer and a language reformer, often called the Father of American Scholarship and Education. Webster is probably most famous for reforming English spelling, and creating an American Dictionary of the English Language.

Webster studied twenty-six languages to evaluate the etymology of the words, including Old English (Anglo-Saxon), Greek, Hebrew, and Latin. He studied etymology for over ten years and developed his own elaborate system for tracing the histories of English words.

But although Webster’s dictionary remains a landmark in the history of English lexicography, his etymologies proved to be highly unreliable. They show that Webster was either unaware or ignored the concept of language families or systematic sound changes. In fact, most of his etymologies were simply guesswork.

For instance, he lists the word ‘speak’ as derived from the Ethiopian term ‘sabak’ (to preach) – which is not correct. He also proposed that ‘speak’ is related to the Italian word ‘spiccare’ (to shine), and that the root of ‘speak’ is “allied to that if beak, peak, pick“.

Thus, although Webster is known for his work in etymology, among other things, and often named among famous etymologists, his work in this area cannot be relied upon.

Sir James Augustus Henry Murray (1837 –1915), was a Scottish lexicographer and philologist. He was the primary editor of the Oxford English Dictionary from 1879 until his death. Murray received a knighthood in 1908.

James Murray, for the most part, educated himself — he had to leave school at the age of fourteen for lack of funds. However, he continued learning on his own, with a special interest in etymology. Murray became fascinated by the meanings of words, and their connection to foreign languages.

Murray learned Spanish, French, Catalan, Italian, and Latin, as well as Portuguese, Vaudois, and Provençal, “to a lesser degree,”. He also gained a working knowledge of the Gaelic, Dutch, German, Danish, Slavonic and Russian languages. He learned Hebrew and Syriac, well enough to read the Old Testament, and picked up some Coptic, Phoenician, and Arabic.

When the idea of the Oxford English Dictionary was conceived, it was intended to be a vast archive of English words from the mid-12th century and, in some cases, from earlier dates. The construction of the dictionary was to be based on strict historical and descriptive principles. In addition, each definition would be followed by an example of usage, including the date.

With the help of his family members as well as people sending quotations from all over the world, Murray collected a vast number of examples for thousands of English words. This then enabled him to write concise and elegant definitions, complete with sentence examples and etymologies.

You can read more about the history of the OED in The Professor and the Madman — an excellent book!

James Murray worked on the OED for over thirty years, until his death. But the work did not stop there — the OED was first published in 1928, thirteen years after Murrays’s death. Murray is considered to be the dictionary’s first and greatest editor. Furthermore, he is still renown today for his contribution to lexicography and etymology.

If you enjoyed this article, you may also be interested in: