Who is the Bad Guy? 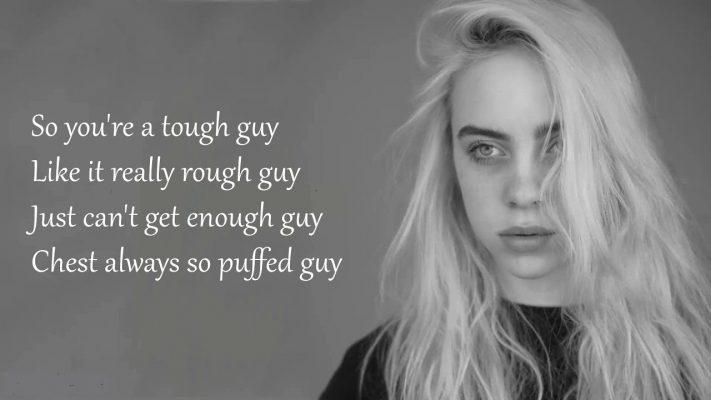 “Bad Guy” is a funky, bass-heavy track that sees Eilish taunting her lover, flaunting her tough nature, while questioning his own. When asked in an interview which tracks she was most excited to release, she responded:

Eilish is the boldest new kid on the block! So, who is this teen sensation burning up the charts with hit after hit? Billie Eilish is a highly decorated American singer-songwriter who rose to fame in 2015, with her debut song ‘Ocean Eyes’. She became well-known in the music industry after racking up several singles, albums, and EP’s. Recently, she was the recipient of several Grammys — the youngest singer ever to receive this recognition.

Lately Billie has taken the pop world by storm with her song “Bad Guy”. Billie wrote the song with her brother, Finneas. This track has become an all-time favourite, both for Billie, and amongst her teenage audience because of the language, vibe, engaging lyrics, and up-beat tempo.

“Bad Guy” explores the themes of relationships and power dynamics. The song plays with how people hide behind façades in their self-portrayal. It sends a powerful and empowering message — that we should be free to be who we are without pretence.

In an interview with 102.7KIISFM, the star teen explained that ‘the song pokes fun at the way people present themselves’. She continued, ‘the initial idea for the song is like people that have to tell everybody that they are a certain way all the time. They’re not that certain way’.

In other words, a person who is bad doesn’t usually go around advertising it. She considers how teenagers usually want to be a part of the “cool gang” — and remember, Eilish is also a teenager. The use of colloquial languages and slang makes it very relatable to her teenage fans. “I’m the bad guy/Duh” — can you make the connection?

“It’s basically making fun of everyone and their personas of themselves. Even mine. The initial idea for the song is, like, people who have to tell everybody that they are a certain way all the time? They’re not that certain way. […]

In general, I feel like you will never catch a bad bitch telling everyone she’s a bad bitch. It’s on—it’s you. If you’re going around all the time saying, like, ‘Yeah, I’m bad, I’m always breaking rules and doing this and doing that.’ You’re not. I know that because I used to say that and I wasn’t. Bad kids, bad boys, bad bitches, whatever, they do that shit and they don’t even know.”

Expressive body-language also features throughout the video — facial expressions, whispers, gestures, yelling, jumping. Would the message of the song been as effectively communicated if Eilish had used a more subtle choreography? Theories confirm that teenagers tend to be naturally experimental and adventurous and respond well to bold imagery.

Some have criticised the lyrics for being raunchy, without considering the more subtle messages. Let’s look at a some of the lyrics: the opening line is bold — ‘white shirt now red, my bloody nose’ — maybe it refers to unfortunate decisions or misjudgements that teenagers can make during this phase of their lives. The song continues:

“Sleepin’, you’re on your tippy toes
Creepin’ around like no one knows
Think you’re so criminal
Bruises on both my knees for you
Don’t say thank you or please
I do what I want when I’m wanting to
My soul? So cynical”

These lyrics clearly depict sexual dynamics and power control — ‘I like it when you take control’. Furthermore, the video features several fierce-looking men, who may be representing the dominant patriarchy. However, Billie’s interpretation of the song is that our personas should speak for themselves. You don’t need to advertise who you are.

Later, she nods towards stereotypes amongst women in relationships. Billie seems to question the way women are stereotypically painted in relationships — she describes herself as wearing cologne — she’s dominant, and the other woman in this guy’s life is intimidated by her.

Billie Eilish, with her attitude, unique sense of style and provocative lyrics has wormed her way into our hearts. We recommend that everyone refrains from being “Bad Guys”!

When the Inuit talk about snow
What it takes to be a translator
Is 2020 Jumping the Shark?