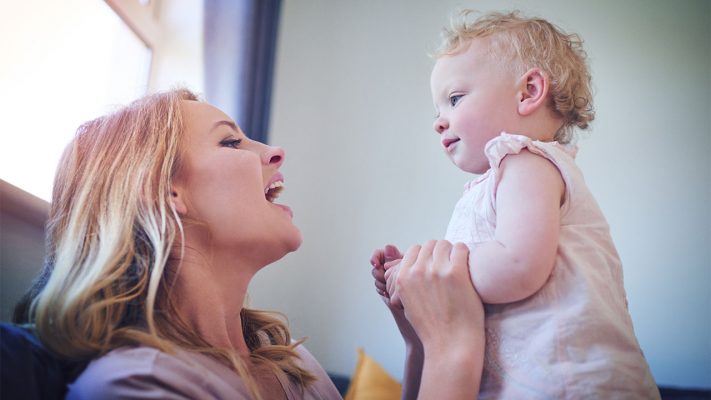 Language development is a very individual process: children in similar conditions or even in the same family can develop at a different pace. However, most children tend to follow a natural progression of mastering language skills, and there are certain rough milestones that can be identified. They help parents and doctors determine when a child might need extra help.

In this article, we are going to take a look at some of the key milestones in language development in babies, as well as some of the ways how parents can facilitate this process.

Practically since the moment they are born, babies start soaking up the sound of speech around them, in particular, the speech of their primary caregiver. Here are the key milestones of the speech development process in babies:

When they are born, babies communicate mainly through crying: they use it to show that they are hungry, cold, need a diaper change, and so on. At 2-3 months old, babies start making soft cooing sounds and exaggerated vowels to demonstrate pleasure.

At 4-6 months, the range of sounds widens: babies gurgle, squeal, laugh, and make other sounds; they start making verbal sounds, making consonants such as b, k, m, p, putting consonants and vowels together (‘baba’, ‘dada’). They also begin to learn the musical sound and speech patterns of the language.

Between 6 and 9 months, babies babble, making syllables and longer sequences of sounds that may sound like normal speech in their native language. They imitate sentence length, intonation, and rhythm of adult speech as they begin to learn how to form verbal thoughts. They begin to connect sounds to actual ideas and thoughts.

Between 9 and 12 months, babies usually begin to say their first real words, like ‘mama’ and ‘dada’ — not just making up or imitating syllables.

By 18 months to two years old, a child’s vocabulary has up to around 50 words. They begin to put words together into simple short (2-3 words) sentences.

At this time, a child’s perceived vocabulary is much larger than their expressive one: they may be able to say just a few words, but they understand hundreds more, including simple sentences and instructions. At around 10-11 months old, babies begin to show their understanding by pointing, nodding, and other gestures.

How parents can help

As a parent, you can facilitate your child’s language development and encourage them to speak by giving them lots of opportunities to talk, playing interactive games, looking at books – you don’t have to read the text but can talk about what you see in the pictures.

Communicating with babies is often associated with the so-called ‘baby-talk’: silly sounds, nonsense words. While it is a perfectly acceptable way to communicate with your baby, using ‘parentese’ would be more beneficial for them.

‘Parentese’ is fully grammatical speech that involves simple, but real words, elongated vowels and exaggerated tones of voice, simplified grammar. ‘Parentese’ also has a higher pitch and a slower tempo. It sounds happy and engaged, helps babies connect with their parents and respond.

Research has shown that babies whose parents spoke ‘parentese’ to them babbled more and produced more words by the age of 14 months than infants whose parents didn’t.

In general, talking more to your child not only helps them learn the language faster but also boosts their overall development potential.

YOUR NEURAL LANGUAGE PATHWAY IS 25 MILLION YEARS OLD
Until now, scientists believed that the earliest origins of our language pathway emerged around five million years ago. Passed down to us from a common ancestor of both humans and apes […]

THE ASSEMBLY CALCULUS
Neuroscience has made many breakthroughs in understanding how the human brain works. We better understand behaviour, for example, and why we react to stimulus the way we do. We are also learning how, within the brain, complex connections are functioning: between molecules, neurons and synapses […]