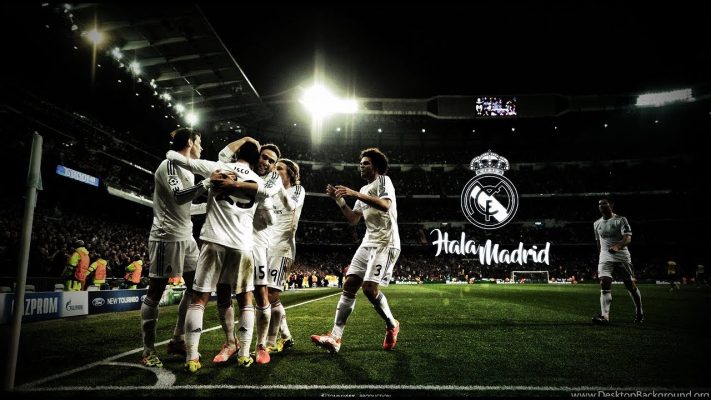 “¡Hala Madrid!”Real Madrid Club de Fútbol is one of three founding members of La Liga, the Spanish Football League. Since its inception in 1929, they have never been relegated from the top division (along with Athletic Bilbao and Barcelona). The club holds many long-standing rivalries, most notably El Clásico with Barcelona and El Derbi with Atlético Madrid. Real Madrid’s anthem — “¡Hala Madrid!” — can usually be heard every match day, reverberating throughout the Santiago Bernabéu Stadium. It is used as a rallying cry for fans, a sign-off on Social Media, and it’s even the name of Real Madrid’s Club Magazine! But where does the phrase, and the anthem, come from?

What does “Hala Madrid” mean?

In general, hala is a Spanish colloquial term expressing surprise, admiration, encouragement, or to strengthen a command. For example:

The linguistic origins are unclear, but it’s been suggested that it may derive from Arabic (as do many Spanish words), or possibly from the French equivalent, Allez!

However, some linguists claim it comes from Arabic Allah, meaning God. There are, of course, numerous instances of Arabic words being absorbed into/borrowed by Spanish. This is due to the Moroccan influence in Al Andalus (the province now known as Andalucia). For example ojalá, which originates from the Arabic insh-allah, meaning “if God wants”; or ¡olé! from walleh, meaning “for God”.

An alternative theory is that hala sounds like the Arabic word yallah – which means let’s go!, or forward! Furthermore, it can be repeated – YallahYallah – to mean “Faster Faster” or “Go! Go!” which is certainly appropriate for football!

Finally, others have proposed that hala comes from the Arabic word hayya. Which, although it’s hard to translate, kind of means “move forward” or “let’s move forward”. It’s possible that it began as halla in Spanish — which is the closest possible pronunciation to the Arabic word “haY-Ya”.

“Hala Madrid y nada más”(“Go Madrid and nothing more!” or, “Go Madridand that’s it!”) was composed by Moroccan-Swedish artist and producer RedOne. The lyrics were written by Manual Jabois, a well-known journalist and football aficionado.

Here is the official video, which includes Cristiano Ronaldo, Gareth Bale and Marcelo, plus historic clips of other Real Madrid greats.

Go Madrid and that’s it!

The stars are now coming out!
My old Chamartin…
From far away and from nearby
You gather us all here!

I wear your shirt
Right next to my heart!
The days you play
Are everything I am!

I am struggle! I am beauty!
The cry I learned:

Of course, the football season starts tomorrow! But sadly, tomorrow there will be no fans singing in the stadiums. But we can still shout at the TV! And while we would like to say ¡Hala Madrid!… I’m afraid, as a proud, Barcelona-based company, we choose instead to yell… ¡Força Barça!

The FC Barcelona Anthem
The etymology of chocolate
How to speak Guatemalan Spanish like a local!