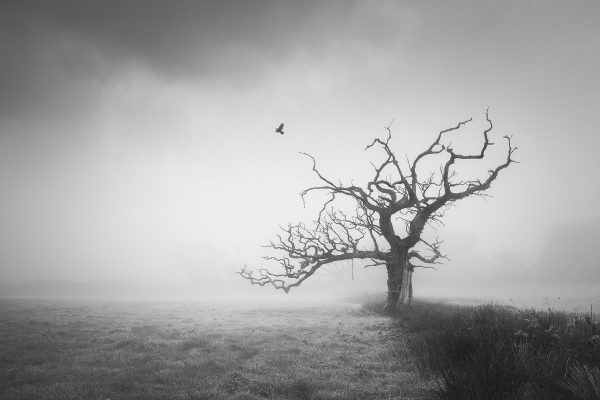 The Merriam-Webster dictionary defines ‘sinister’ as ‘singularly evil or productive of evil’, ‘accompanied by or leading to disaster’, ‘presaging ill fortune or trouble’. The word has a strong negative connotation, and the synonyms to it are ‘menacing’, ‘ominous’, ‘threatening’, and other similar words.

But the meaning of the word ‘sinister’ has not always been so dark.

The definition of etymology (Oxford Languages) is: ‘the study of the origin of words and the way in which their meanings have changed throughout history’. Notice the word ‘changed’ there: it is, in fact, very rare that words travel trough centuries completely unchanged.

The changes in meaning that can occur within a word are called ‘semantic change’ or ‘semantic shift’. That is to say, the meaning of a word can widen or narrow, become more positive or more negative. The latter is exactly what happened to the word ‘sinister’.

Sinister appeared in the English language in the early 15th century; with the meaning ‘prompted by malice or ill-will, intending to mislead’. It travelled from the Old French ‘senestre’, ‘contrary, false; unfavorable; to the left’. In turn, it entered Old French from the Latin; ‘sinister’ meaning ‘on the left side’.

Some uses in the English language retained the Latin meaning of the word. For instance, on a coat of arms: the left side, from the bearer’s point of view, was the ‘sinister’. While the right side was the ‘dexter’ and furthermore, was considered to be the side of greater honour.

In Latin, ‘sinister’ and ‘dexter’ were, respectively, ‘left’ and ‘right’. However, while the meaning of ‘sinister’ has significantly degraded over the centuries, the connotations of ‘dexter’ have become more positive.

For instance, if you are a person who can use both their hands equally well, you are ‘ambidextrous’; from the Latin ‘ambi’, on both sides, and ‘dexter’, right-handed. Why couldn’t it also be ‘ambisinistrous’, though? Skill in performing tasks, especially with the hands, is ‘dexterity’, not ‘sinisterity’.

A similar treatment of ‘right’ and ‘left’ is present in other Indo-European languages. The French word for ‘left’, ‘gauche’ also means ‘awkward’. The Russian word ‘левый’ means ‘fake’ in certain contexts.

Why have words that originally simply labelled different sides, received such different treatment?

Why such changes happened

The association of the left side as something evil, dark, and negative is likely a result of humans being predominantly right-handed. Using one’s left hand has become associated with awkward movements or clumsiness — which must be suspicious! Or, even uncleanliness — as in some cultures people used the left hand to clean themselves after defecating.

The spread of Christianity strengthened this attitude. In the Bible, Eve appears on the left side of Adam. The phrase ‘the right hand of God’ is refers to God’s omnipresence. More importantly, on the day of Final Judgement, the righteous people who will go to Heaven are placed to the right of Jesus, while the doomed sinners are on his left.

All this resulted not only in the semantic shift within the words meaning ‘left’ and ‘right’ — it also created a general bias against left-handed people. This bias still exists in some form even today.

Fortunately, left-handed people are no longer accused of witchcraft, demonic possession, and deviancy. However, there are many everyday objects (notebooks, scissors, a computer mouse) that are inconvenient for left-handed people to use. Until quite recently, many schools forced left-handed children (sometimes physically) to write with their right hand.

Linguistic bias is also still strong. If you are a bad dancer, you have ‘two left feet’. An unflattering or insincere compliment, is a ‘left-handed compliment’. A person who handles issues and situations poorly, can be called ‘cack-handed’ — referring to the unclean left hand.

As unpleasant as it may be, the linguistic bias is unlikely to disappear any time soon, as words like ‘sinister’ and ‘dexterity’ are integrated firmly into the English language.

On the left side

Societies with different cultural references, will end up with different linguistic connotations! The Incas called left-handers ‘lloq’e‘ (and still in the modern indigenous language of the Andes, Quechua: lluq’i) which has a positive value. The peoples of the Andes consider left-handers to possess special spiritual abilities, including magic and healing.

The Third Sapa Inca (Incan Emperor) was Lloque Yupanqui. He was left-handed, and his name, translated from Quechua, means “the glorified lefthander.”

In tantra Buddhism, the left hand represents wisdom. Lastly, in modern language we have words like ‘leftfield’ for something that is different, creative or inventive. So lefties! Be proud of your leftfield leftism!

You may also find these articles interesting:

The Names of Nature: Urban Flora and Fauna