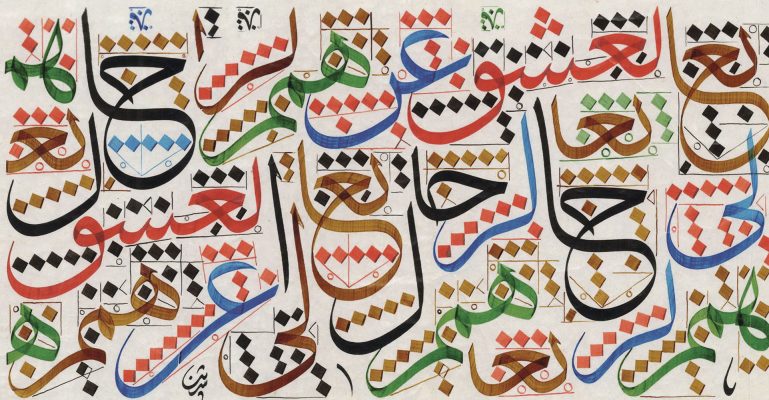 The Arabic chat alphabet, also known as Arabizi and Arabish, enables Arabic-speakers to send messages using a roman keyboard. Arabish developed in the 1990s, when Arabic-text keyboards and software were (even) less widespread than they are today.

Young people are the most common users, and they generally use it for short, informal communication. Arabish is increasingly prevalent in advertising, particularly in the United Arab Emirates.

The system itself is based on using roman characters as phonetic or graphical approximations of Arabic characters. Thus, ﻙ is represented with k, which is the English letter closest in sound to it. Whilst ع is rendered with the numeral 3, because it looks like a mirror version of the Arabic character.

In Russia, an analogous technique called Volapuk is used, but, unlike in Arabizi, the equivalents chosen for cyrillic letters are based on similarity of appearance alone. There is also an adapted Persian alphabet which achieves the same effect called Fingilish (a portmanteau of Farsi and English). Fingilish was formalized into a system for transliteration known as Desphilic.

The issue of Arabish is provoking familiar linguistic outrage, particularly from the pan-Arabists. Arguments that young people are losing the ability to write and speak Arabic is part of a broader backlash against the perceived infiltration of English.

In one of the few serious academic studies of this phenomenon available online, David Palfreyman and Muhamed al Khalil observe that the spread of Arabish is an aspect of the increasing use of Modern Standard Arabic (MSA) as a written language. This responds, they argue, to social and technological necessity.

Their analysis also makes the picture more complex and undermines the argument that Arabizi is a kind of linguistic fifth column for English:

The AA [i.e. Arabish] used by these students broadly follows latinization conventions used in signage in Dubai. This means that AA is in many respects a transcription of what writers would say, rather than a transliteration of Arabic script: although the initial motivation for using AA may be the difficulty of using Arabic characters themselves, the students do not simply turn each Arabic letter into a corresponding Latin one. For example short vowels, which are not normally written in Arabic orthography, are often included in AA.

Despite the increasing prevalence of software designed specifically for the Arabic market, people often prefer to use an English-based interface. Arabish is a more complex and far-reaching development than either its advocates or detractors seem to want to admit. Whether it is the first stirrings of what might become a sort of ‘simplified Arabic’: a combination of MSE with stripped-down script-rendering software, remains to be seen.

Until then, we strongly advise using a professional Arabic translator!