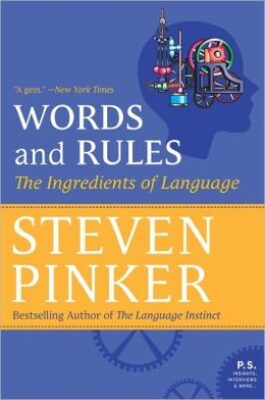 Today, I would like to take the liberty of recommending an article from the archive of the London Review of Books, specifically, a review of Stephen Pinker’s 2000 Words and Rules. The review itself furnishes an excellent overview of the two main schools of linguistic thought of the last century:

On the rationalist side, so far as linguistics is concerned, we have Chomsky, who believes that much of what we are able to do with language cannot be derived from experience, but must be innate, hidden somehow in our genes. In the enterprise known as generative linguistics, he and his colleagues have studied the elaborate system of rules and structures that make an ‘infinite use of finite means’ – Wilhelm von Humboldt’s description of the unbounded combinatorial power of language. According to Pinker, the dominance of rationalism in linguistics is now being challenged by the model of ‘connectionist networks’, the modern embodiment of empiricism. This model understands the mind as a massive collection of elementary, but intricately connected computing devices called artificial neurons, by analogy with the brain, a massive collection of real neurons. Our linguistic capabilities are acquired from what the network is exposed to: when a furry feline is seen at the same time as the sound ‘cat’ is heard, a link between the two is established.

Not just translation! We also provide Audiovisual Services
What if it’s a bad translation?
Language Register: Business vs Colloquial