Why a pumpkin on Halloween? 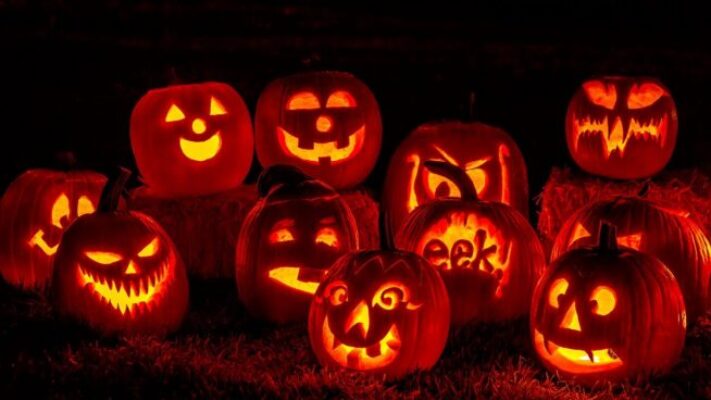 Pumpkins have been grown throughout North America for 5000 years. In 1584, after French explorer Jacques Cartier explored the St. Lawrence region of North America, he reported finding what he called “gross melons.” This, when translated to English, was called “pompions,” which then evolved into our modern “pumpkin.”

Pumpkins have become a major part of the tradition in the fall holidays of Halloween and Thanksgiving. An orange fruit that is harvested in October, highly nutritious and almost every part is edible. Pumpkin is used to make soups, desserts, and bread, pumpkin pies are also very common for Thanksgiving in America. Carving pumpkins into jack-o’-lanterns is a popular Halloween tradition that originated hundreds of years ago in Ireland, now becoming a craft. Back then, however, jack-o’-lanterns were made out of turnips or potatoes; it wasn’t until Irish immigrants arrived in America and discovered the pumpkin that a new Halloween ritual was born. Talk more with your translators, and you’ll know.

Halloween originated from the Celtic festival of Samhain, marking the end of summer and start of the New Year, on November 1. It was believed that on this day otherworldly spirits and souls of the dead came to the world of the living to visit.

From these came the widely known myth Stingy Jack. A farmer who tricked the devil for his monetary gain. He made the devil promise that after he dies, he will not be sent to Hades to repent for the sins he had committed. But when he died and tried towards Heaven, he was refused. The angry Jack came to hell and banged the doors of Hades. But the Devil had fulfilled his promise of not taking him in hell. Jack was given only a small hellfire in a lantern to wander the land of living for eternity. You don’t need a translator agency to understand all this.

Pumpkins are the best

The Celts are the ones that came up with the myth. People of Ireland started to cut off the top of vegetables like potatoes and turnips and carve out the insides to give it a demonic face. A light source was kept inside most likely a candle. This was to frighten away Jack’s wandering soul. Thus, they were called Jack-O’-Lanterns.

Because of the Irish Potato Famine, millions of its inhabitants migrated to America. There they were introduced to pumpkins, that were very common. They declared the pumpkins as the best vegetable (actually a fruit) to carve out lanterns.

In the modern times, pumpkins are still being widely used for the carving of lanterns. So much so that it has become one of its main use. There are many types of lanterns, those with candles as lighting source, some with papers and there also that have electric lights like bulbs and LEDs.

The carving itself has become crafting or art. Now the generic demonic looking faces are not the only ones to be found. You will find, whole scenarios carved into pumpkins for display, they are even sold in markets. Unlike ancient time, the purpose is to celebrate the day as a festival rather than to scare-off poor Jack.