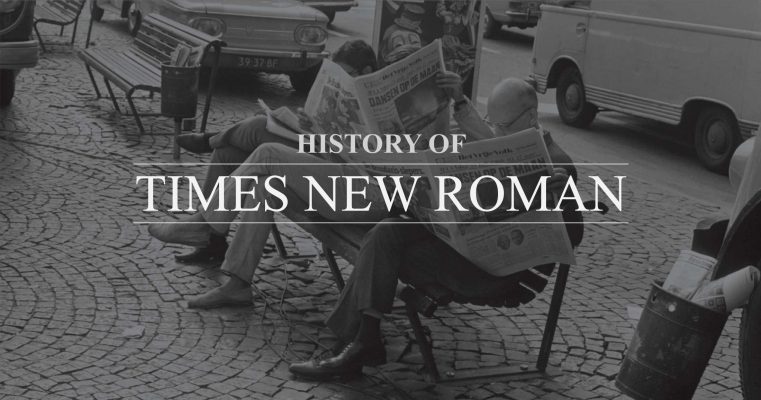 Adored by typographers and readers worldwide, this is the story of Times New Roman!

The Times of London, a British newspaper, commissioned Times New Roman in 1929. Stanley Morison, the artistic advisor to the British branch of the printing equipment company Monotype, conceived the font in collaboration with Victor Lardent, a lettering artist in the Times’ advertising department.

Morison used Plantin, an older serif typeface also by Monotype, as the basis for Time New Roman. Lardent and Morison designed Times for superior reading legibility, however it mostly matched the dimensions of Plantin. Key features are that it uses comparatively less spacing between letters (kerning), combined with a heavier contrast between strokes. Reduced kerning saves space, while the heavy strokes retain clarity. Times New Roman has a high x-height, short descenders to allow tight linespacing and a relatively condensed appearance.

The origin of the ‘Roman’ style was a metal type created in the late-16th century, by the French artisan Robert Granjon. It is preserved in the collection of the Plantin-Moretus Museum in Antwerp.  Historian and Monotype executive, Allan Haley believed that compared to Plantin, Times’ “serifs had been sharpened… contrast was increased, and character curves were refined”. While Lawson described Times’s higher-contrast crispness as having “a sparkle [Plantin] never achieved.”

Morison wrote in a memo that he hoped further widths and weights would have relatively sharp serifs, to match the style of Roman. However he imagined a darker, traditional basic structure. Morison’s biographer Nicolas Barker wrote that Morison’s memos of the time wavered between many options. It was concluding that Plantin formed the best basis for a condensed font. Perpetua had been his pet project for Morison. However, Morison conceded it was “too basically circular” to be condensed in an attractive way. Lardent’s original drawings were lost, but it’s said he “showed the spirit of the final type, but not the details”. The Monotype drawing office team worked out spacing and fine detail.

Morison maintained his connections to The Times throughout his life. He edited the History of the Times from 1935 to 1952. Times New Roman remained Morison’s one and only type design. Although no longer used by The Times, Times New Roman it is still widely used as a default in computing and publishing.