Should we translate tapas? 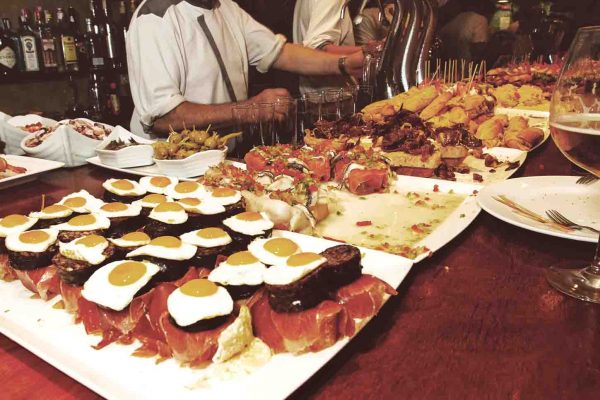 There is a little pavement café in Valencia, called La Taberna de la Reina (the Queen’s tavern) which serves “tapas”. It calls itself, in English, a “tapas bar”. This is a poor translation of “bar de tapas” using the plural noun “tapas”. But should you translate tapas?

Let me explain, the usual rule in English is that when a noun is used in an adjectival sense, it is invariable, like all adjectives. So we don’t have “snacks bar” or “steaks restaurant”. And yet I’ve seen “tapas bar” so often now that it almost, almost sounds right. A “tapa”, for those who don’t know, is a Spanish snack, something to eat while you have a drink.

To get back to the story, the printed menu at the Taberna asks in four languages:

What struck me was that each translation uses a Spanish term which does not appear in the Spanish. A “pincho” is a particular sort of “tapa” characterised by having a toothpick stuck through it. Although, in this case it was merely being used a synonym for “tapa”.

It’s fun to look out for this phenomenon. Spanish and French use loanwords like “parking” and “camping” to mean “car park” and “camping site”. Presumably they believe that these are the usual English terms!

German has “Handy” for “mobile phone” and Germans argue whether the plural of this “Englisches Wort” should be “Handys”, a German plural form, or “Handies”, following the English spelling convention. They also use “beamer” for “LCD projector” and are often surprised when native English speakers fail to understand them. Curiously, “beamer” is a colloquial American name for German BMW cars.

But I still wonder… should we translate tapas?!