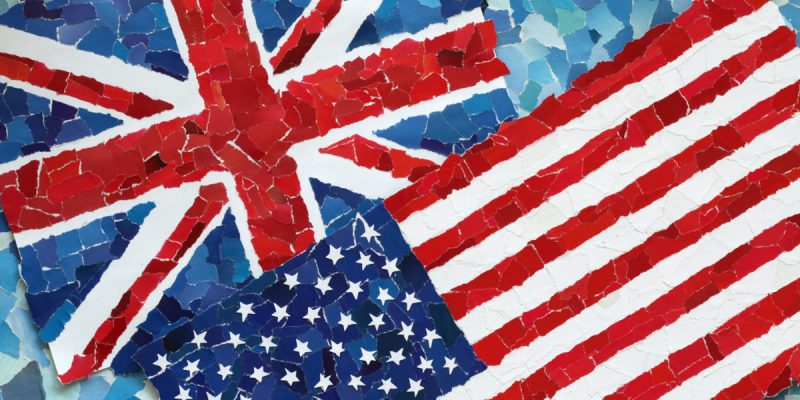 The existence of the two variants of the English language has been causing trouble for learners for quite a while now! So, in the battle between British English vs. American English, who should you back?! Which is correct? What are the differences? Which one should I learn? These questions often arise in people’s minds when they begin learning English.

Let us answer some of these questions, once and for all, in this article!

Both of them are. Or, in fact, all of them – including other variants, like Canadian English, Australian English, New Zealand English.

None of the variants of the English language are inherently ‘correct’ or ‘incorrect’. They have some different features and a slightly different flavour, so to speak. And, indeed, native speakers of one variant sometimes perceive some aspects of the other variant as weird or funny.

However, this does not make any of the variants ‘incorrect’ – just different from each other.

The answer to this question might seem obvious, as Britain is a much older country and British English ‘was there first’, so to speak.

But interestingly enough, the American dialect of the English language preserved some words and speech patterns that are older than those used in British English today.

When settlers moved from England to the Americas from the 17th century, they ‘brought’ their language with them, which then started developing independently from the language in England. As a result, some words and structures were preserved in the American dialect which later disappeared from the British one.

For instance, the word ‘Fall’ used to name the season of the year was used from the 16th century. In British English, it was entirely replaced by the word ‘Autumn’.

Another example is the use of more traditional grammar in American English. For instance, American English uses “gotten” as the third form of the verb “to get” (the pastparticiple). However, gotten dates back at least to Middle English and probably to the earlier Old English (West Saxon) word “ġietan”.  In British English, it is only preserved in words like ill-gotten and forgotten.

What are the differences?

The most noticeable differences between British English vs. American English are those in pronunciation and vocabulary. There are also differences in grammar, punctuation, and spelling. Here are some examples.

In British English, when r comes after a vowel in the same syllable (as in car, hard, or market), the r is not pronounced. In American English, the r is pronounced.

The letter t in the middle of a word (in words like better, water, bottom) can be pronounced like a fast d in American English.

As discussed, Americans continue to use gotten as the past participle of get, which the Brits have long since dropped in favour of got.

Needn’t, which is commonly used in British English, is rarely, if at all used in American English, which usually uses ‘don’t need to’.

Which one should you learn?

If you have plans to travel or, what is more, study or work in a particular country, it’s better to learn the variant that is used there.

Variants of the English language are not too different (they are, after all, variants of one language and not separate languages) and are mutually intelligible. But you’ll be more comfortable studying in Britain if you master the British English variant.

Otherwise, you can just choose the variant you enjoy more. Remember, none of them is more correct or better – they are all great and they are all English!

At Quicksilver we only use native-speaking editors (as well as translators)! We have not only British English and American English but also, Irish English editors! All in-house, and on hand to help you. In fact, Academic editing is one of our most popular services. Get in touch!