Why do only human apes ask questions? 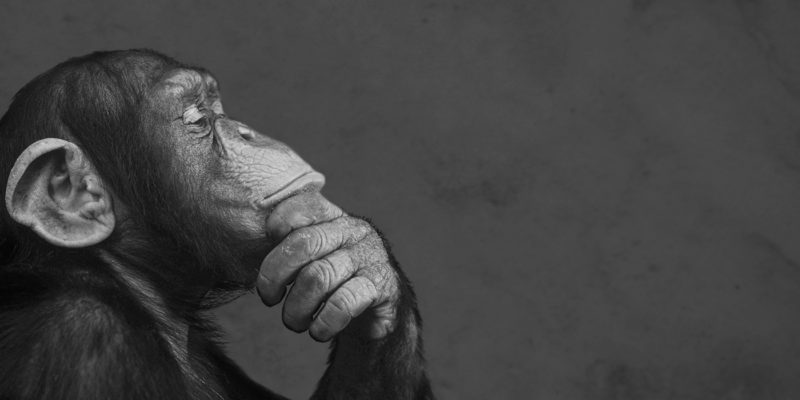 Why haven’t apes used Sign Language to ask us a question?

What’s going on in the mind of a monkey? Can we ever find out? Research into the language of apes has scientists teaching sign language to the smartest primates to try to communicate. It turns out they are thinking a lot more than “I want a banana”. But they are not asking questions.

Chimpanzees, bonobos, gorillas, and orangoutangs have shown they can learn basic sign language and have a casual flow of conversation. Koko the gorilla, a famous ape based at a research facility outside Santa Cruz, California, has learned more than 1,000 words using a modified sign language. Koko described herself as a “Queen” with her first few words.

Her vocabulary compares to a 3-year-old child, but only through sign language. Is it even possible for apes to talk? Most say no, because their tongues and voice boxes don’t allow for complex sound creation like humans have. We can only wonder if they imagine the language in their heads while they communicate with sign language.

A bonobo called Kanzi participated in similar experiments and some patterns emerged. Kanzi understands more human language than any other non-human animal. Kanzi at 7 years old, answered hundreds of complex questions with a 70% success rate on the answers.

The language, however, was always simple. “I tickle”. “Chase hide”. “Chase bite”. There were never any full sentences or complete sentence structures. Chimpanzees like Lana, gorillas like Koko, and Bonobos like Kanzi, were all unable to string sentences together, but does this mean they can’t?

Do only humans have the capacity to ask questions?

Kenzi and other apes were able to understand questions and answer with basic sign language and single word answers or gestures. However they never asked questions themselves.

Professor and researcher, David Premack wrote, “Though she [Sarah the chimpanzee] understood the question, she did not herself ask any questions – unlike the child who asks interminable questions, such as What that? Who making noise? When Daddy come home? Me go Granny’s house? Where puppy? Sarah never delayed the departure of her trainer after her lessons by asking where the trainer was going, when she was returning, or anything else”

This self awareness seems unique to humans. We know that we exist. We also know that we think we exist, and we can ask “why do we exist?”

It has been suggested that asking questions is probably the central cognitive element that distinguishes humans from animals. Others have considered that question asking may require a level of syntactic comprehension that is beyond an ape’s capability. However, human toddlers, as yet unable to form proper sentences, can ask questions using only intonation. It has been widely accepted that even babies can ask basic questions using intonation.

If asking questions is a human trait, what about Alex?

When working with Alex, a grey parrot, animal psychologist Irene Pepperberg found that Alex seemed to be an unusually smart parrot. Pepperberg said that Alex had learned to understand basic concepts like “bigger”, “smaller”, “same”, and “different”, amongst other basic distinctions. It was said that Alex had a two-year-old’s level of intelligence.

For example, when Alex was shown an object and was asked about its shape, colour, or material, he could label it correctly. He could describe a key as a key no matter what its size or colour, and could determine how the key was different from others. Most interestingly, when looking at a mirror, Alex asked what colour he was — and learned that he was grey. Alex remains the first and only non-human animal to have ever asked a question.

Does water have gravity?

We know children ask the most questions. It’s how they learn about the world. Animals, even the smartest of them, the great apes, learn by mimicry. They copy their mothers actions. When one ape learns to smash a nut with a rock, their baby does it too. Also called Social Learning, it is also the primary method by which small children learn, and also often the way most humans learn languages.

However, human children ask endless questions. My nephew is an avid question asker. He once asked my sister “what does vintage mean?” after she pointed out a vintage car. She replied “it means old or old fashioned, can you think of something vintage we have in the house?”. He replied, “Daddy?”.

Another question he’s asked is “Does water have gravity? Because if so, why do we float?”. These are real questions from my nephew. It shows that the human mind is a curious question asker from the moment we can speak.

We can only wonder how the great apes think. Do they ask themselves questions? Will they one day ask us important questions about our world, as we wonder about theirs? Maybe one day we’ll find out.

Is Translation a Commodity or a Service?
When the Inuit talk about snow
What it takes to be a translator