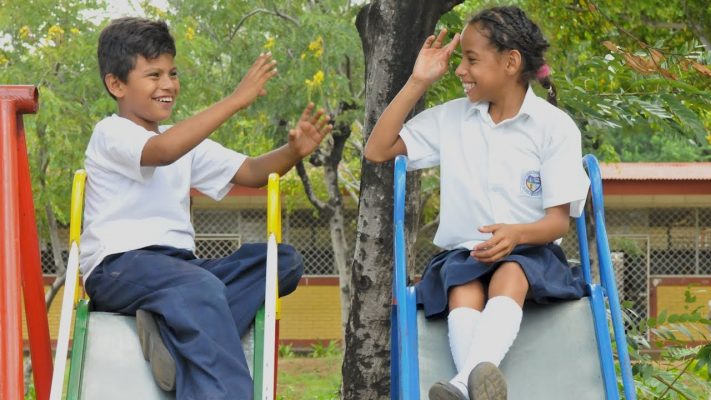 Nicaraguan Sign Language: The birth of a new language

When you hear the word combination ‘sign language’, you probably think of American Sign Language (ASL) or French Sign Language. These languages were developed specifically for the deaf and are based, to some extent, on existing languages. However, the Nicaraguan Sign Language (ISN; Spanish: Idioma de Señas de Nicaragua) is something quite different.

Nicaraguan Sign Language is a language that was developed spontaneously, by deaf children in the 1970s and 1980s. This occurred at a number of schools in western Nicaragua. Linguistically, this is especically interesting, as it provides linguists a rare opportunity to study the birth of a new language.

In this article (which is part one of a two-part article) we will take a brief look at the history of ISN and how it came to be.

Prior to the late 1970s, there was no community for the deaf in Nicaragua. A few deaf children received an education at private clinics. However, these clinics mostly focused on teaching them to understand, and use, written and spoken Spanish. Moreover, the deaf children were largely isolated from each other and communicated only with their families. Their usual method of communication being only simple signs and gestures (mímicas).

In 1977, a centre for special education established a new program that was initially attended by 50 deaf children. Later, more children and teenagers joined. The intention of this program was to teach the children to communicate in Spanish, and via lipreading. However, the equipment to help utilise the children’s residual hearing (such as hearing aids) was not available, so it was not very successful.

The children were disconnected from their teachers because they did not know any sign languages. Fortunately, the centre did not prevent the children from gesturing or signing to each other, and the first stages of ISN developed in their interactions.

The teachers and other staff were unaware of the new language that was developing. As they could not understand it, they viewed the children’s gesturing as a failure to learn Spanish. Not being able to understand what the children were saying to each other, in June 1986, they invited Judy Kegl, an American Sign Language linguist from MIT to assist them. Kegl and other researchers identified ISN as a separate language, at the early stages of development.

How the language developed

To communicate with each other, the children were combining the gestures and signs they used at home, but alongside, they were creating new and unique signs. Thus, gradually creating their own new and distinct language.

One of the significant factors in the ‘birth’ of ISN, was the sheer number of deaf children and teenagers that came together at the centre. Also, more children joined the centre every year. As well as acquiring the new language, they also contributed to developing it further.

New children joining the centre, with their ‘fresh view’ and creativity, contributed to new structures emerging in the language. As a result, the signing clearly changed from group to group.

Nicaraguan Sign Language does not have a spoken or written form, but it nevertheless presents a very interesting linguistic phenomenon. We will take a more detailed look at what it means linguistically in another article.

Many people who attended the centre still speak ISN. However, changes in technology and communication in Nicaragua have led to the increased use of American Sign Language (ASL) within the deaf community.

ASL has not replaced ISN, which still dominates deaf education in Nicaragua. However, Nicaraguan Sign Language has begun a natural process of integrating elements of ASL. This, of course, is perfectly natural as borrowings usually occur when two languages coexist.

Nicaraguan Sign Language is a unique case of a language developing independently – without any influence from other languages – in the modern world. The specific conditions it appeared in allowed it to grow and flourish into a curious linguistic phenomenon. This has prompted many discussions and extensive research.

This is part one, of a two-part article. In part two we will look at the linguistic discoveries which have been made by ISN researchers, and the implications for language study in general.

Part two will be posted on Friday 17th April.