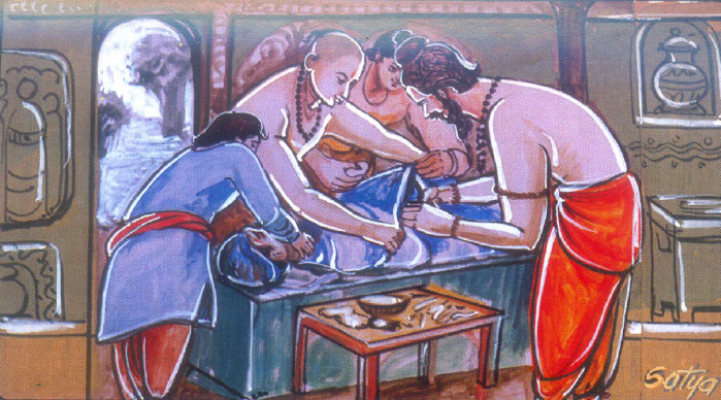 The Sushruta Samhita (Suśrutasaṃhitā, literally “Suśruta’s Compendium”) is an ancient text on medicine and surgery. Scholars believe it to be the oldest surgery manual in existence — at nearly 3000 years old. The book describes surgical training, as well as instruments and procedures. The process of nasal reconstruction due to trauma, is described in detail. This procedure is still carried out in the same way today.

The word Suśruta means ‘renowned’. Contemporary texts describe the author as being a doctor practising in Varanasi, sometime between 1200-600 BCE. However, it is likely that other suśrutas contributed to the final compendium.

The foundation of Ayurveda

The foundational texts of Ayurveda are the Great Trilogy, of which Sushruta Samhita is one. The other two being the Charaka Samhita, which preceded it, and the Astanga Hridaya, which followed it.

Ayurvedic Medicine is among the oldest medical systems in the world, dating back to the Vedic Period of India (c. 5000 BCE). The term Ayurveda translates as “life knowledge” or “life science” and is the practice of holistic healing. Methods incorporate “standard” medical knowledge with spiritual concepts and herbal remedies in the treatment, as well as prevention of diseases.

Scope of the Sushruta Samhita

One of the key concepts in the book is prevention of disease. Suśruta believed it was important to invest in preventative measures, such as regular physical exercise and good hygiene. However, there was cautioning against excessive activity! Regular moderate exercise, suggests Suśruta, improves resistance to disease and physical decay.

Students of Suśruta took an oath before beginning their studies – to devote themselves to healing and to do no harm to others. This is very similar to the later Hippocratic Oath from Greece, which doctors still abide by today.

It was Suśruta’s belief that to be a skilful surgeon, one must first be an anatomist:

“The different parts or members of the body as mentioned before including the skin, cannot be correctly described by one who is not well versed in anatomy. Hence, any one desirous of acquiring a thorough knowledge of anatomy should prepare a dead body and carefully, observe, by dissecting it, and examine its different parts.”

The Sushruta Samhita was the first book in history to suggest that surgical students should study the human body and it’s organs by dissecting dead bodies. This was a controversial idea then, and remained controversial for another 1000 years.

According to Hindu principles, the human body is sacred in death. Hindu law (Shastras) forbids violating a body with a knife. The law also requires that people older than two years of age, are cremated in their original condition. Suśruta was, however, able to bypass this decree and study human anatomy by using a long brush or broom. This scrapped off skin and flesh without the dissector having to actually touch the corpse.

Suśruta also suggests placing the corpse in a cage (to protect it from animals) and immersing it in cold water, such as a running river or stream. So to observe its decomposition in order – to study the layers of skin, musculature, and finally the arrangement of the organs and skeleton.

As well as recommending anatomical study, the book also states that students should practice on objects. Suggestions include squash, cucumber and leather bags filled with fluid and animal bladders. Medical students practised on objects for up to six years before they were permitted to begin hands-on training.

The text describes amputations and obstetrical procedures. It mentions three different methods of grafting. The process of nasal reconstruction, using skin taken from the cheek, is described in detail. The procedure is still carried out in the same way, today:

Other surgical procedures include how to remove a dead foetus, and the process of making surgical incisions to remove stones (or calculi) from the urinary tract. Besides general surgery, Suśruta gives an in-depth account of how to treat 12 varieties of fracture, and six types of dislocation.

The text describes around 700 medicinal herbs – their appearance, as well as taste and digestive effects. Suśruta gives instruction regarding the safety of prescribing medicine, as well as the efficacy, dosage and benefits.

Interestingly, the Sushruta Samhita refers to physical isolation as a method of preventing the spread of contagious diseases. Specifically, the risk of spreading contagion through physical contact, eating together, sitting together, and using the same clothes.

An earlier text, the Charaka, had already discussed the importance of environment and genetics to general health. However Suśruta built on this by encouraging physicians to ask questions about a patient’s lifestyle and environment when diagnosing. Suśruta clearly understood the concept of genetic disease. Furthermore, he was aware that grandparents, as well as parents, could pass down genetic conditions.

Suśruta believed that diet was extremely important – as a proper diet will balance the Doshas. Suśruta suggests asking the patient about their diet, as well as questions regarding exercise. He also suggests asking about thoughts and attitudes, as these could affect health.

Ultimately, Suśruta believed that to achieve optimal health there must be a harmony between the mind and the body. Furthermore, that people could maintain this harmony with proper nutrition, exercise, and rational, uplifting thought.

In the early 8th century, Caliph Mansur of Bagdad (c. 753-774 CE) ordered an Arabic translation of the Sushruta Samhita. The Caliph kept a vast library, which he considered important for the advancement of knowledge. The Arabic title was Kitab Shah Shun al-Hindi’, also known as Kitab i-Susurud.

The Arabic translation reached Europe by the end of the medieval period.

In Renaissance Italy, the Branca family of Sicily and the Gasparo Tagliacozzi (Bologna) knew of the rhinoplastic techniques mentioned in the Sushruta Samhita.

The Khmer king (Cambodia) was familiar with the Sushruta Samhita as early as the 9th century. In the same period, Tibetan texts describe it as an authoritative medical text.

The Kaiser Library in Nepal has one of the oldest manuscripts in its keeping. The manuscript, which is handwritten on palm leaves, has been verifiably dated. The scribe completed his work on Sunday, April 13th, 878 CE.

Suśruta made clear his purpose when writing his compendium:

He also gave a description of the ideal surgeon, which still rings true today:

“A person who possesses courage and presence of mind, a hand free from perspiration, tremor less grip of sharp and good instruments and who carries his operations to the success and advantage of his patient who has entrusted his life to the surgeon. The surgeon should respect this absolute surrender and treat his patient as his own son.”