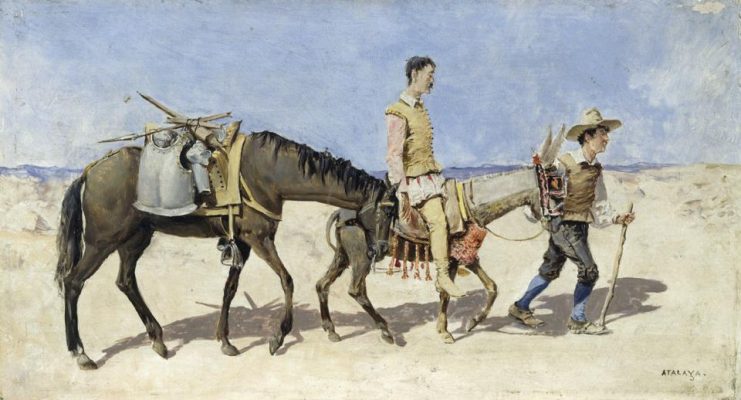 Here is the opening sentence of Cervantes‘Don Quixote:

Of course, this sentence is an old chestnut of translation studies. Not least because it can be rendered into English in several different ways, as these examples show:

“In a village of La Mancha the name of which I have no desire to recall…”;

“In a village in La Mancha, the name of which I cannot quite recall…”;

“In a certain village in La Mancha, which I do not wish to name…”;

“Somewhere in La Mancha, in a place whose name I do not care to remember…”

A ‘literal’ translation would run as follows: ‘In a village of La Mancha, the name of which I don’t want to recall, not long ago there lived a gentleman of those who have a lance in the rack, an ancient shield, a worn-out horse and a greyhound for running.’

This list would not be complete without a contribution from one of the most prominent translators of our time:

‘Somewhere in la Mancha, whose name I remember, not long ago there lived a knight of the lance and ancient shield, a lean hack and a greyhound.’

It’s a passable translation, with more or less appropriate vocabulary and a decent syntactical flow. However, there is just one problem: it leaves out one small word. Specifically, the word ‘don’t’. With this omission, the entire sense of the translation breaks down. Instead, we are left with a text which in fact says the opposite of the original.

This last version is, of course, a product of Google Translate. It demonstrates the great strengths, and the fatal flaw, of this and other, lesser internet translation engines.

Google Translate is quick, effective and free. It can render the basic sense of any text almost instantaneously, clarifying arcane or archaic vocabulary, and putting the whole thing into a just about readable English (or French, or German, or Afrikaans…) As this example shows, however, it very often misses or mistranslates something crucial.