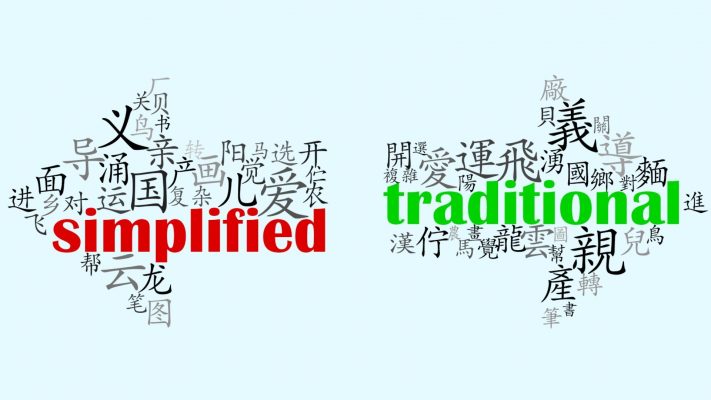 We are often asked to explain the difference between Traditional and Simplified Chinese, and when each should be used. Mostly, clients want to know which is the most appropriate to use.

The short answer is: use Simplified for mainland China (PRC) and Singapore, and use Traditional for Taiwan.

What we should really be asking

However, it gets much more interesting than this. In the first place, it’s not really the right question! The question should really be “should we use the traditional or simplified script?”. Since it’s not the language which changes but the characters used.

Chinese characters have evolved, quite slowly, over several thousand years. However, in the 1950s the Chinese government decided to simplify a couple of thousand of the most commonly used characters. Specifically, they reduced the number of strokes needed to write them.

The language itself is not affected in any way by this change, (just as writing draught or draft in English is merely a spelling convention). Singapore has accepted the simplified script, but Taiwan and Hong Kong have rejected it and continue to use the traditional versions of the characters. However, most educated Chinese speakers can read texts written in both types of script, and in any case most characters are the same in both systems.

So can we just produce one Chinese translation and then write it out in two versions: one in traditional script and one in simplified? In principle yes, but in practice “Simplified Chinese” implies Chinese as used in the PRC and “Traditional Chinese” implies “Chinese as used in Taiwan”. And these are not quite the same, just as British and American English are somewhat different. So we mostly end up with two separate translations, one for Taiwan in Traditional script and one for China in Simplified script (see Language Localisation)

So even though we started by saying the labels Traditional and Simplified refer only to the script. In fact they end up referring simultaneously to the variants of Chinese used in these places.

Which language variations should you translate into?
Ever wondered why we ‘boot’ a computer?
Language Register: Business vs Colloquial