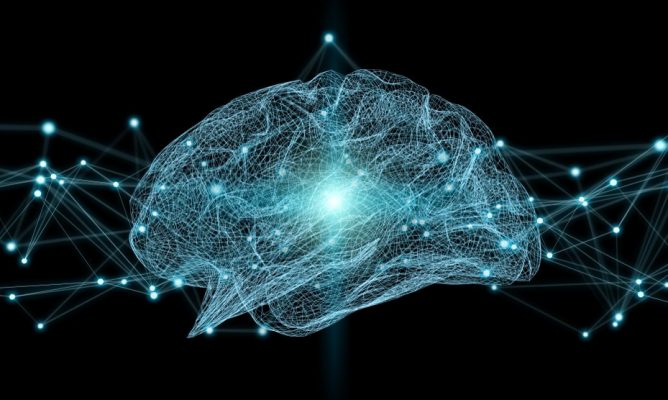 Until now, scientists believed that the earliest origins of our language pathway emerged around five million years ago. Passed down to us from a common ancestor of both humans and apes. In human brains, the language pathway (or neural pathway) is a bundle of fibers connecting the brain’s expressive and receptive language areas. Chimps have a similar setup in their brains — indicating we inherited this structure from a shared ancestor.

The study, led by Christopher Petkov, a professor of comparative neuropsychology, set out to establish whether monkeys have a similar pathway. A question that Petkov describes as “highly controversial but important to resolve.”

Previously, researchers had assumed that the language pathway could only be usefully studied in humans. Since, we are the only species capable of speech. However, Petkov and his team predicted that the pathway could be hiding in the auditory system of other animal’s brains.

Teams from the Europe and the USA carried out a brain imaging study. They analysed brains of macaques and chimpanzees, as well as humans. Specifically, they examined the auditory cortexes and neural pathways. They discovered that apes and monkeys have a version of a neural pathway, similar to our own. This means the pathway formed when humans last shared an ancestor with the macaque monkey. This was at least 25 million years ago. Petkov describes the discovery as “really quite a surprise“. Adding, “It is like finding a new fossil of a long lost ancestor. It is also exciting that there may be an older origin yet to be discovered still.”

The comparison to finding a perspective-changing fossil is apt — this discovery unmasks our evolutionary history. While bones fossilise, our brains do not. This means that neuroscientists have to guess how the brain of our common ancestor might have been structured. However, by studying the brains of living primates, they could compare the evolutionary process to that of a human.

The study discovered a segment of the language pathway in humans that interconnects the auxiliary cortex with the frontal lobe regions. This is important for language and for processing speech. Language and speech are unique to human beings. However, the link to the auditory pathway in other primates indicates the path of the evolutionary process. And that it began with vocal communication and auditory cognition.

The study has enabled scientists to better understand the development of the language pathway in humans. Key differentiators are that the left side of the human brain pathway is stronger. In addition, the right side has diverged and, as a result involves parts of the brain that are non-auditory.

Initially, the research team studied brain scans which were shared by the global scientific community. Later, they also generated new brain scans that were original. The intention being that these scans will be available to future studies. There is now a possibility that the auditory precursor to our human language pathway could be even older still. The team hopes that this study will inspire new neurobiological research to discover the earliest evolutionary origins. The next “brain fossil” discovery could be a link in animals that are more distantly related to humans.

Consultant neurologist, Professor Timothy Griffin, one of the senior authors on the study, said: “This discovery has tremendous potential for understanding which aspects of human auditory cognition and language can be studied with animal models in ways not possible with humans and apes. The study has already inspired new research underway including with neurology patients.”

The Language Pathway ahead

In the future, neuroscientists plan to study this issue with a focused integrative perspective. The intention is map and analyse neural elements and how they interact. New tools, both computational and theoretical, make this possible. This could open up a newfrontier in the study of neural networks — including the control, manipulation and repair of network processes. Eventually, leading to a better understanding of the brain as a networked system.

“Language can be spoken, written, or signed, but if some of these pathways are more or less intact, that might provide a venue for a more accurate prognosis of language recovery and new ideas on rehabilitation to improve language abilities.”

If you found this interesting, you may also enjoy: