We are Family! Language Families 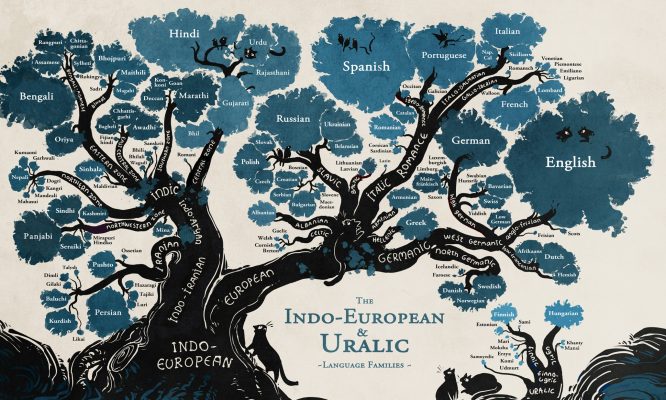 Linguists classify languages into different groups to study them more effectively. Grouping languages together allows us to study their common features, how they function, as well as how the languages have developed and interacted over the course of history.

Linguists group languages together based on different principles, depending on the focus of a particular study. Classifications — where languages are grouped according to their structural characteristics — are called typological. The number of such groupings is virtually unlimited.

For instance, we can group languages together based on the prevalent word order. For example, some languages use Subject-Verb-Object like English and Mandarin Chinese. Whereas, other languages use Verb-Subject-Object, like Arabic and Filipino.

A genetic (or genealogical) classification groups languages together according to the degree of their relatedness. In this article, we will take a look at what language families are and what does it mean for languages to be related.

What are language families?

As defined on Wikipedia, a language family is:

‘a group of languages related through descent from a common ancestral language or parental language, called the proto-language of that family’

Language families are further subdivided into groups and subgroups of closely related languages. They are often represented in the form of a ‘family tree’. For example, see the Indo-European language family tree below:

To establish that two languages are related, it is not enough to study them in their present state. Linguists also study historical written records extensively. This is also due to the fact that certain similarities are the result of borrowing, not genetic connections. So studying how languages developed and interacted over the course of history allows us to establish that.

What language families are there?

Determining whether languages are related and how related they are is quite a complicated task that does not yield 100% exact results. Many linguists disagree on grouping certain languages together and lists of language families differ from source to source.

However, according to Ethnologue, there are 142 language families, some including hundreds or even thousands of languages and dialects (like Austronesian languages), and some just a few.

The six major language families are Indo-European, Afro-Asiatic, Niger-Congo, Austronesian, Sino-Tibetan, and Trans-New Guinea. Together, they account for two-thirds of the world’s languages, and make up about five-sixths of the world’s population.

What does it mean for languages to be related?

Basically, if two languages are related, they share certain grammatical and lexical similarities. Like two people from the same family, they ‘look similar’ to each other.

Closely related languages, like, for instance, Spanish and Italian, have some degree of mutual intelligibility. Speakers of one such language can understand simple phrases or simple written texts in the other.

This can make life easier for learners. For instance, speakers of English, a Germanic language, will be able to master other Germanic languages. This, however, also means that learning languages from other families may be harder as their structure is so different.

What are language isolates?

A language isolate is in its essence a language family consisting of just one language. This is not the same as an unclassified language: when a language is unclassified it usually means that there is not enough data to classify it as part of this or that family. In the case of language isolates, there is plenty of data, but it is still impossible to draw concrete conclusions.

Part two of this article will take a more detailed look at linguistic isolates, what they are, their implications.

You may also enjoy reading about some of the world’s Uniquely Interesting languages!

Language Register: Business vs Colloquial
What is Chinese?
When the Inuit talk about snow