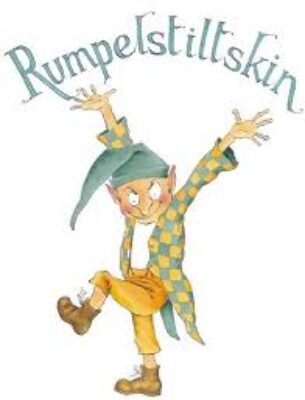 Although Rumpelstiltskin is a fairy tale that originated in Germany, the same story pattern is globally extremely widespread: there is a similar creature in Icelandic folklore known as Gilitrutt; a Tom Tit Tot in England; a Whuppity Stoorie in Scotland; a Joaidane (he who talks too much) in Arabic; a Ruidoquedito (soft noise) in Latin America; an Ootsli-Gootsli in Israel; and, my favourite, the Croatian Cvilidreta, or whine-screamer.

But it is the German version of this fabulous motif that is the most well known. In German, he is called Rumpelstilzchen, which literally means ‘little rattle stilt’. A stilt can refer to an upright wooden post and, by extension, the stalk of a piece of fruit. A rumpelstilt or rumpelstilz is a sort of acoustic poltergeist that announces its presence by knocking on wood and rattling posts; the ‘-chen’ particle is simply the German diminutive, like the Spanish ‘-ito’.

Translations of the Grimm tale generally opt to adapt the German name, rather than use the name of the local version. Thus, in English, we have Rumpelstiltskin, which loses the sense of the ‘-chen’, as does the Portuguese Rumpelstichen. The Dutch and Swedish translations retain the suggestion of ‘stalk’ (despite the fact that this meaning of ‘stilt’ has no relation to the original story), and we thus have the partial-calques of Repelsteeltje and Päronskaft (lit: pear stalk) respectively. Most other languages opt for a totally new, generally meaningless, coinage. According to Wikipedia, which is never wrong, French has a rich history of translations of the name Rumpelstilzchen, which includes Barbichu, Broumpristoche, Grigrigredinmenufretin, Outroupistache and Tracassin.

Fashions for translating or not translating proper name changes over time. It is currently the practice not to try and render names into different versions, with the notable exception of royal families and popes. Thus, in English we talk about Pope Benedict and in Spanish the British Queen is referred to as La Reina Isabel. The jury is still out, however, when it comes to band names, as you will discover if you ever try to find a copy of the new U2 album in Spain or Italy.