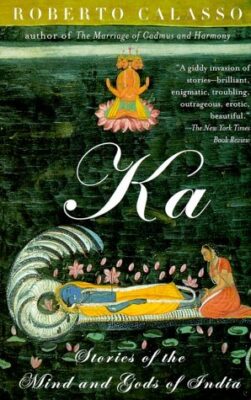 I just wanted to share an article from the London Review of Books archive, by the English translator of Roberto Calasso’s Ka: great book, great translation, an extremely interesting and thoughtful article:

Prajapati was alone. He didn’t even know whether he existed or not.

I too am alone. It’s fairly early in the morning. About 8.30. I am translating a book by an Italian writer called Roberto Calasso. The book is called Ka and amounts to a creative reconstruction of Indian mythology. The lines above are the first lines of the second chapter. This chapter deals with the god Prajapati, the oldest and first god, the Progenitor, and what is worrying me is that the Italian says, ‘Non sapeva neppure se esisteva o non esisteva.’ Should I have written: ‘He didn’t even know whether he existed or didn’t exist’? Why does that sound rather odd to me in English, but not in Italian? Was the repetition of a key verb like ‘exist’ important? How far does the English auxiliary ‘didn’t’ truly recall the verb it picks up? I can’t decide.

Cortazar and Yourcenar
Borges and Thurber on the (in)fidelity of translations
Twentieth Century Hungarian Literature!