Analysis of the song “You will never walk alone” 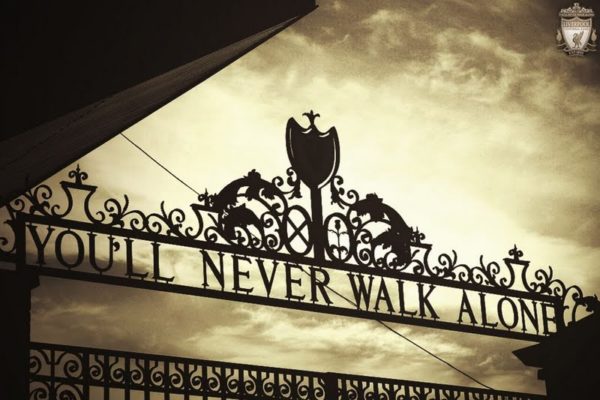 If you are familiar with football and watch the game now and then, the chances are that you’ve come across the famous Liverpool anthem ‘You’ll never walk alone.’ Just as fans worldwide attribute a particular piece of heritage to a local sports team, the people of Liverpool chose this song. Let’s look further into the song and what it means and represents.

How old is this song?

The origins of the song can be traced back to a Musical on Broadway, Carousel, in 1945. The song went on to become very famous with the masses due to its uplifting tone and strength in times of adversity. Note that during this time, World War 2 was happening which is why this was a song that the crowd needed. The song was fairly popular throughout the 50s as well and was covered by top artists such as Elvis Presley and Frank Sinatra. Sometime around 1963, Gerry and the Pacemakers released their cover which is when this song became the local chant for the Liverpool football club.

How did it become the official chant for Liverpool FC?

Back in the 60s, the football ground for Liverpool FC was one of the few that had a PA system and the Top Ten in a pop culture used to be played before every game. Since this was a time when the Beatles and Gerry and the Pacemakers were quite famous, you will never walk alone was played very often since it was number 1 on the charts for quite a while. During this time, it became the official chant.

The importance of the song

Experts in languages, such as linguists and translators have repeatedly emphasized from time to time on the power of words and music, especially when they are in harmony with each other. The essence of the song is reflected by the unity of the fans, and the supporters display in times of sporting crises.

Due to the popularity of the song, several translation agencies have been employed to perform meaningful translations and generate sub-titles for non-English listeners for them to enjoy the soothing effect of the music while having the relevant lyrics on display as well to increase comprehension. A few phrases that stand out in this song are:

This implies the tendency of the human nature to be afraid of the unknown. This song unites its listeners and insists that together if we walk, the darkness shall not be something to be afraid of.

What makes this phrase so different from the rest is the resilience that this song inculcates in its listeners. The song essentially says that if you feel that you have been trampled and do not feel the will to carry on, stay put and move onwards. A particular translation agency particularly emphasized on this phrase since it carries such deep meaning.