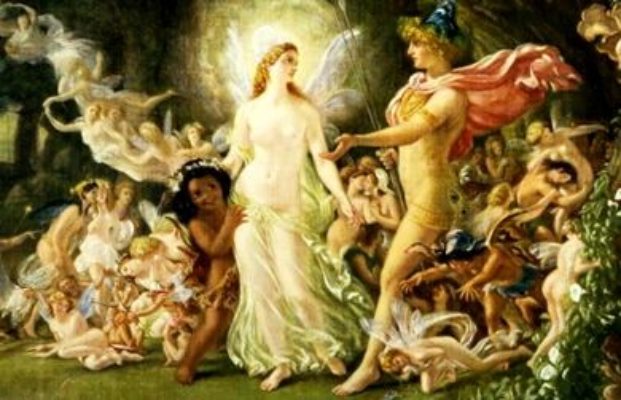 Shakespeare’s comedy “A Midsummer Night’s Dream” takes place on Midsummer Night, the magical night of the summer solstice when anything can happen, including “A Dream”. The indefinite article refers to the dream, not to the night, which is not just any summer night but THE night before Midsummer’s Day (June 24 – with apologies to the tropics and the southern hemisphere). So the title can be paraphrased as “A dream which takes place on the night before Midsummer’s Day”.

But this is not the way the French translator understood it, calling it instead le Songe d’une nuit d’été, which gets it backwards, as though it were “The dream which takes place on a night in the summer”. The Spanish translator did exactly the same, perhaps influenced by the French (or vice versa): El sueño de una noche de verano. Now Midsummer’s Night in Spain is “La noche de San Juan” (St. John’s night) and is quite as magical and associated with ancient traditions as it is in England. So why not Un sueño de la noche de San Juan? Even El sueño de una noche de San Juan, (with the definite and indefinite articles inverted again) would work, since it could be read as “”The dream which takes place on Midsummer’s Night (one year or another)”.

German is not much better, with Ein Sommernachtstraum. The ambiguity of the indefinite article is still there. And Sommernacht? Why not Johannisnachtstraum, which is the true Midsummer’s Night. Danish has much the same: En skærsommernatsdrøm. Italian makes the same mistake as French and Spanish with Sogno di una notte di mezza estate (Dream on a night somewhere in the middle of summer). So do Portuguese: Sonho de uma noite de verão and Catalan: El somni d´una nit d’ estiu.

Another Shakespeare play, Twelfth Night, might seem to present similar problems. Imagine it in French as “la douzième nuit”. Twelfth night is in fact the twelfth after Christmas, the night before Epiphany and the visit of the Wise Men. This time Spanish has Noche de reyes and French La nuit des rois, so they got it right.German avoids the problem by translating the sub-title As you will as Was ihr wollt.

I can’t help wondering whether the persistence of mistakes such as this are due to translators in different lanuages copying each other.

Author, Anonymous
The Strange Case of the Chivalric Romance
The Homeric Question