The Strange History of the Christmas Tree 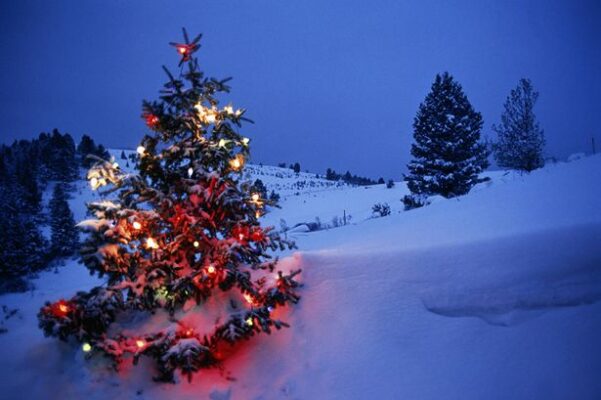 One of the most popular, and perhaps strangest Christmas traditions is the placing of a tree inside our house! Decorating the Christmas Tree and finding presents underneath on Christmas morning, is enjoyed by both adults and children alike. So it pains me to tell you that the Christmas Tree hasn’t always been widely accepted as a symbol of Christmas. Shocked? Read on…

The root of the evergreen’s place in our festivities, lies in our early pagan cultures. According to the Encyclopædia Britannica, “The use of evergreen trees, wreaths, and garlands to symbolize eternal life was a custom of the ancient Egyptians, Chinese, and Hebrews. Tree worship was common among the pagan Europeans and survived their conversion to Christianity in the Scandinavian customs of decorating the house and barn with evergreens at the New Year to scare away the devil and of setting up a tree for the birds during Christmas time.”

The ancient Egyptians celebrated the end of winter by gathering around trees which represented the life provided by their Sun-God Ra. The Romans decorated their houses with evergreen wreaths during the mid-winter festival of Saturnalia. The Vikings and Saxons worshiped trees. An early Saxon folk story speaks of an evergreen tree growing in place of a felled oak, and how its shape pointed to heaven.

These pagan origins make it difficult to understand why the tree has become so integral to a Christian festival. But it does explain the backlash!

The tree’s initial reception in Christianity

As Christianity spread, people found it hard to abandon some of the pagan practices they used to follow. Most especially, many were reluctant to give up their popular winter solstice festivities. So religious leaders engineered the Christmas holiday, both to appease the masses and usurp the old pagan traditions.

Modern Christmas trees first appeared during the Renaissance in Germany. Sometimes associated with Protestant reformer Martin Luther, who is said to have first added lighted candles to an evergreen tree. However, the first recorded Christmas Tree can be found on the keystone sculpture of a private home in Alsace, dated 1576.

Europe quickly embraced the tree as a Christian tradition. However, it seems early settlers to the United States were determined not to adopt these dreadful pagan practices! The Puritans wanted to exclude any pagan influence from what they saw as a very serious and sacred occasion. In fact, in Puritan America, it was illegal to have a Christmas tree!

However, a new wave of European immigrants soon poured in, bringing with them their own festive traditions. Eventually, they convinced the Puritans to loosen up! It was primarily the German settlers who introduced the Christmas tree to the New World. We can also thank Queen Victoria (and her beloved German husband) for popularizing this German tradition!

These days we place Evergreen trees in houses, squares and high streets right across Europe. Though most countries favour a fir-tree, Georgians have their own traditional Christmas tree called Chichilaki, made from dried up hazelnut or walnut branches that are shaped to form a small coniferous tree.

The giving of Christmas Trees has also become associated with the end of hostilities. For example, the City of Oslo (Norway), sends a tree each year to Trafalgar Square in London. With this, they thank the Londoners for their support of the Norwegian resistance during the Second World War. Norway also sends a tree to Washington D.C. as a symbol of friendship between Norway and the U.S.A.

Though the Christmas Tree does indeed have pagan roots, it has become one of our most enduring and charming Christmas traditions.

Coronavirus pandemic: Can we learn from the Plague?
Some interesting facts about Quarantine
History of Newspapers in India